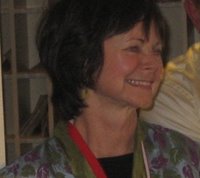 How often do you get to hear a Pulitzer prizewinner talk about her work-in-progress two days after she has won the prize for her last book? That’s what happened yesterday, when Geraldine Brooks spoke to a (very crowded) audience at the Radcliffe Institute for Advanced Study here in Cambridge. Brooks is an Institute Fellow this year, and her (pre-scheduled) talk focused on “Making Fiction From Fact.”

I thought I’d share some of my notes from the talk:

1) In discussing the “factual” background to her work-in-progress, currently titled The People of the Book, Brooks cited William Styron, who noted that “While it may be satisfying and advantageous for historians to feast on rich archival material, the writer of historical fiction is better off when past events have left him with short rations.” That’s the case for Brooks’s current project, which isn’t as richly “documented” to date as, say, March (the book that just won the Pulitzer) was. For that book, one of Brooks’s research resources was the 61-volume set of journals left by Louisa May Alcott’s father.

2) Reprising some themes I remembered from her New York Times Writers on Writing piece, “Timeless Tact Helps Sustain a Literary Time Traveler,” Brooks stressed the primacy of empathy in the historical fiction writer’s toolbox. Emotions, she suggested, remain constant from generation to generation.

3) Detailing her own process, Brooks told us that the first thing she needs to do is find a voice for her character. The voice then reveals who the character is. This tells Brooks how the character acts. And what the character does leads Brooks to her research needs. She said that Cold Mountain author Charles Frazier had told her that halfway through writing his novel he made himself a rule: he would not go to the library until he needed to know at least 3 things. Apparently he was becoming too immersed in research. Let the story drive the research, Brooks advises.

4) In a delightfully digressive moment, Brooks (a former journalist) shared her views about the still-present James Frey story. She, for one, seems to wish the book would be off all the nonfiction lists. Calling his book nonfiction, she says, sets the bar too high for people who are trying to do the real thing: write nonfiction. Real nonfiction has to cope with the messiness of life in ways that fiction does not. If his book is considered nonfiction, she suggests, everyone will expect nonfiction writers to “accomplish’ things that are really in the realm of fiction. And those nonfiction writers who can write exemplary seamless stories are devalued when Frey is held up as their peer.

After the talk, the Institute held a reception to honor Brooks. With champagne. (That’s where I snapped the photo.)

One thought on “Geraldine Brooks on Facts and Fiction”