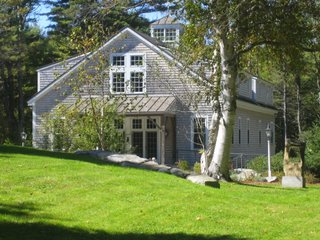 I know you’re all waiting breathlessly to hear about the residency. (For those of you new to the blog, I’ve just spent a month at the Robert M. MacNamara Foundation on Westport Island, Maine; the photograph shows “MacBarn,” the Foundation’s main building, where the very talented visual artists had their studio space [and four of them were housed].)

I did a lot of writing, and a lot of reading. And plenty of sleeping, I admit. That’s what happens when there’s no TV and I can’t feed my cable news addiction at night.

I can’t tell you how great it was to have so much time to read, especially. What did I read, you ask? Here’s the list:

The Collected Stories of Isaac Babel, edited by Nathalie Babel
The Pity of It All: A Portrait of the German-Jewish Epoch, 1743-1933, by Amos Elon (I couldn’t resist Shira Nayman’s recommendation, which you can read in this Q&A on JBooks.com)
The Painted Drum, by Louise Erdrich
Never Let Me Go, by Kazuo Ishiguro
The Woman from Hamburg and Other True Stories, by Hanna Krall (translated by Madeline G. Levine)
The Lost: A Search for Six of Six Million, by Daniel Mendelsohn
A Changed Man, by Francine Prose
Israeli and Palestinian Narratives of Conflict: History’s Double Helix, edited by Robert I. Rotberg
The Counterlife, by Philip Roth

I reread some Chekhov stories and Flaubert’s Madame Bovary, too.

It wasn’t totally divorced from my “other,” bill-paying writing work while I was at the residency. Several editors and I persevered through Internet challenges so I could review galleys of work published during my absence (like this review of Carmen Callil’s Bad Faith: A Forgotten History of Family, Fatherland, and Vichy France, which appeared in the October 10 Christian Science Monitor), and work that will be appearing soon elsewhere.

Maine was beautiful, and I’m so grateful for the gift of time to work in such a supportive environment. It’s great to be back, but I feel pretty safe betting it will be quite awhile before I can once again provide such a (relatively) long list of books-read-for-myself.

4 thoughts on “From My Bookshelf: Residency Reading”