Remember BJ Epstein‘s guest post about her experiences as a Jew in Sweden? BJ is an intrepid traveler, and now she has graciously agreed to share impressions (and photographs) from her recent trip to China.

Earlier this month, when I went to China for a translation conference, I didn’t expect to learn some Jewish history. I vaguely knew that some Jews had taken refuge in Shanghai during the Second World War, but I didn’t think too much about it. However, a chance meeting at the breakfast buffet in our hotel with another American Jew convinced me and my trusty sidekick (a.k.a my mother) to make learning about the Jews in Shanghai a priority. 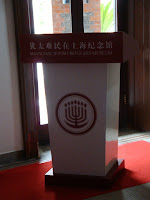 With that in mind, on our last full day in the country, we headed off to the old Jewish quarter, a small area centered around the synagogue. The Jewish Refugees Museum is in what used to be Ohel Moishe Synagogue. There, a young Chinese college student enthusiastically told us about how Shanghai warmly welcomed Jews from Europe during World War 2. Ho Fengshan, called the “Chinese Schindler”, was a diplomat in Vienna who gave visas to Jews so they could enter Japanese-controlled Shanghai and come to safety. My mother and I were told that at the height of the war, there were 25,000 Jews in Shanghai, many of whom had Ho to thank for being alive. After he died, he was named a Righteous Among the Nations by Vad Yashem. After the Holocaust, most of the Jews left China to settle in Israel, Australia, and the U.S., and today there are only around 3,000 Jews left, and they apparently have no synagogue. Some of them are descendants of refugees while others are business people who settled in Shanghai to take advantage of the booming Chinese economy. 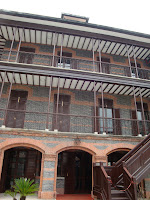 Our guide also informed us that there is a close partnership today between China and Israel, and this was illustrated at the museum by many pictures of Chinese and Israeli dignitaries shaking hands and exchanging knowledge. Most of the captions were in Chinese, however, so although I could tell that Israel was, for example, sharing knowledge about cows with the Chinese, the circumstances were unclear.

The museum also had photographs showing the small synagogue in use during the 1930s and 40s as well as some artwork created to show the connection between Jews and the Chinese. 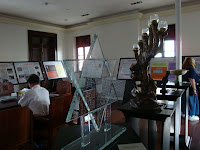 It must be said that China is not the most religion-friendly country in the world, so it makes sense that few Jews are left there today. Nevertheless, the people are extremely, and rightfully, proud of their role in saving Jews during the Holocaust. There was testimony at the museum from families who had been turned down by a dozen or more embassies before receiving a visa that allowed them to leave Europe for China and it is sad to think about what would have become of them without Shanghai’s open arms.