(I wrote this review back in fall 2008. Publication was delayed, and after a time, it no longer made sense for the piece to appear in its original intended home. But I put a great deal into this review, and I’m glad to be able to share it here.)

Writing in the Dark: Essays on Literature and Politics. David Grossman. Translated from the Hebrew by Jessica Cohen. Farrar, Straus and Giroux, 2008. 144 pp. $18.00 (reprinted as Picador paperback in 2009) 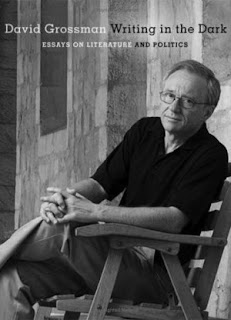 Israel is one of those countries, like France, where the most talented literary authors not infrequently assume the role of public intellectual as well. These writers reason through the moral and political dilemmas of their people—and of people in other lands. In the process, they are actually heard. France had (for example) Emile Zola and Albert Camus. Israel has (among others) David Grossman. This slim collection of six nonfiction pieces, Writing in the Dark, provides a solid introduction to Grossman’s most passionate recent engagements and to his longtime concerns. Despite Farrar, Straus and Giroux’s attempt in the book jacket’s text to characterize this collection as a single despairing “cri de coeur,” as Grossman’s way of “address[ing] the conscience of a country that has lost faith in its leaders and its ideals” (let us recall that the same publisher also brought us the controversial Stephen Walt/John Mearsheimer treatise on the “Israel Lobby”), the truth is that with this book Grossman has affirmed his own faith in Israel’s ideals. And he has affirmed mine.

Translated by the talented Jessica Cohen (whose rendering of Amir Gutfreund’s Our Holocaust I have also reviewed), Writing in the Dark comprises six essays and lectures: “Books That Have Read Me” (written in 1998 and first published in 2002); “The Desire to be Gisella” (January 2006); “Writing in the Dark” (delivered in April 2007 as The Arthur Miller Freedom to Write Lecture at the PEN World Voices Festival in New York City); “Individual Language and Mass Language” (presented at the September 2007 International Literature Festival in Berlin); “Contemplations on Peace” (given at a meeting in Paris in December 2004); and Grossman’s much-publicized speech before the Yitzhak Rabin Memorial Rally in Tel Aviv’s Rabin Square on November 4, 2006.

One might analyze and/or categorize the six pieces in a variety of ways, but for me it’s impossible to avoid a sadly obvious fact: Three of them (“Books That Have Read Me,” “The Desire to be Gisella,” and “Contemplations on Peace”) preceded the death of Grossman’s second son, Uri, a 20-year-old tank commander who was killed during Israel’s Second Lebanon War in 2006—two days after Grossman and two other major Israeli writers (Amos Oz and A.B. Yehoshua) had held a press conference urging Israel’s (then-)Prime Minister, Ehud Olmert, to reach a ceasefire agreement. Grossman produced the other three texts within the year following his son’s death; each one contains references to his family’s tragedy.

Much as his American publisher might wish for potential readers to accept that the book’s purpose is to “address the conscience of a country that has lost faith in its literature and its ideals” and that the volume merely “touch[es] on literature and artistic creation as well as politics and philosophy,” the latter focus—matters of “literature and artistic creation as well as politics and philosophy”—in fact takes precedence. The first four pieces introduce us to Grossman, the Israeli writer, a man born in 1954, an author whose novels See Under: Love, The Book of Intimate Grammar, Be My Knife, Her Body Knows and the as-yet-not-available-in-English novel he was working on when Uri died, and whose nonfiction, including The Yellow Wind, together reflect both the sum total and the particularities of living in a perpetual “disaster zone,” of being perceived as (as well as perceiving) an eternal enemy in everyday life, of constantly seeking language for what seems inexpressible. These writings, as Grossman himself suggests,

are relevant not only to the conflict in the Middle East. In so many parts of the world today billions of people face some threat to the existence, the values, the liberty, and the identity of human beings. Almost every one of us faces his own threat, his own curse. Each of us feels—or can guess—how his unique ‘situation’ may quickly become a trap that will rob his freedom, his sense of home in his country, his private language, his free will.

In this reality, we authors and poets write. In Israel and in Palestine, in Chechnya and in Sudan, in New York and in the Congo. There are times in my workday, after a few hours of writing, when I look up and think: Now, at this very moment, sits another author, whom I do not know, in Damascus or Tehran, in Kigali or Dublin, who, like me, is engaged in the strange, baseless, wonderful work of creation, within a reality that contains so much violence and alienation, indifference and diminishment. I have a distant ally who does not know me, and together we are weaving this shapeless web, which nonetheless has immense power, the power to change a world and create a world, the power to give words to bring about tikkun—‘repair’—in the deepest, kabbalistic sense of the world.

Those who already know Grossman’s books cannot fail to appreciate the additional information and insights that they will find about those works (especially regarding See After: Love) in these essays. Those not yet personally acquainted with the books will surely be inspired to promptly rectify that situation.

Only in the book’s closing two pieces does Grossman evince a more sharply focused concern on the specific question of Israel’s future—and how his countrymen might best safeguard that future. In the 2004 “Contemplations on Peace,” which runs more than 30 pages, he speculates on “how [peace between Israel and its neighbors] may help Israel heal from the wounds and the distortions that currently ail it and hinder its normal development as a state and as a society.” “Contemplations on Peace” perhaps provides one of the clearest and most cogent analyses of “the wounds and the distortions” that may indeed hinder the country’s normal development. But as demanding as Grossman may be of his countrymen, the writer also makes clear that “Israeli fears are not merely the result of delusions or the fruit of Israeli mistakes alone. The Middle East has never internalized Israel as an integral component, as a state that exists there by right, not by grace. The Arab states have never demonstrated tolerance or understanding of Israel’s unique situation and the unique fate of the Jewish people, and they should not be absolved of responsibility for the tragedy of the Middle East.”

And then, at last, in the book’s final ten-and-a-half pages, pages reprinting Grossman’s speech before the Rabin Memorial Rally less than three months after his son’s death, we do see the “cri de coeur” that the publisher promises on the book jacket. Here is where Grossman implores, if not consistently the entire “conscience of a country that has lost faith in its leaders and its ideals,” then certainly the conscience of one Israeli leader: Olmert. “Mr. Prime Minister,” Grossman says, “I am not saying these things out of anger or vengefulness….You cannot dismiss my words tonight by saying that a man should not be judged at his time of grief. Of course I am in grief. But more than anger, what I feel is pain. I am pained by this country, and by what you and your friends are doing to it.”

In this speech, Grossman makes it clear that he has had enough. That Israel has had enough. In this speech he boils down the discussion to its essentials: “Any intelligent person in Israel—and, I will add, in Palestine—knows today exactly where the lines of any possible resolution to the conflict between the two peoples lie. Any intelligent person, on our side or theirs, knows deep in his heart the difference between dreams and heartfelt desires, and what may be obtained at the end of negotiations. Whoever does not know this is already not a partner for dialogue, whether Jewish or Arab, because he is trapped in his hermetic fanaticism.”

In the end, after issuing plea after plea directly to Olmert, Grossman returns to his larger audience with a final entreaty: “From the place where I stand now, I plead, I call upon anyone who is listening—young people back from [the Second Lebanon War], who know they are the ones who will be asked to pay the price of the next war, Jewish and Arab citizens, right and left: Stop for one moment. Look over the precipice, think how close we are to losing what we have created here. Ask yourselves if the time has not come to pull ourselves back, snap out of the paralysis, and demand for ourselves, finally, the life we deserve to live.”