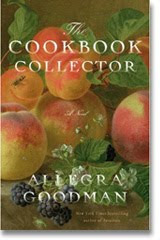 One of the summer releases I’m most looking forward to is Allegra Goodman’s new novel, The Cookbook Collector.

For the past couple of months, I’ve been following Allegra’s blog and enjoying her pre-publication updates. She has also been describing her current writing, and, this week, looking back at her 1999 experience as one of the New Yorker‘s “20 Under 40” (this last bit has been prompted by the current buzz around the magazine’s newly released list).

Allegra has impressed me as an immensely talented–not to mention uncommonly modest and generous–writer since my freshman year in college. During my first semester, I auditioned for and won a small part in play she had written and was producing with her sister (I played an anti-Semite). And I’ve been following Allegra’s literary career with interest and admiration ever since (although I can’t believe it took me so long to discover her blog!).

I thought Intuition, in particular, was an exceptionally good novel, but it looks as though The Cookbook Collector is giving it some competition: The new book has already received starred reviews from Publishers Weekly, Library Journal, and Kirkus. And I’ve pre-ordered my copy.