Each week in this space, Practicing Writing shares no-fee, paying markets for writers of fiction, poetry, and creative nonfiction: competitions, contests, and calls for submissions. The posts complement monthly issues of The Practicing Writer newsletter, where you’ll always find more listings, none of them limiting eligibility to residents of a single municipality, state, or province. (But this blog does share those more localized opportunities, including jobs.) 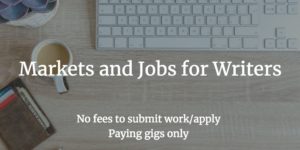 2 thoughts on “Markets and Jobs for Writers”