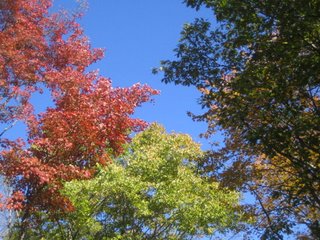 Well, you asked to hear more about the residency, so here’s the first in a series of posts I’ll be making about it.

Let’s start with some background. Last September (2005) I submitted my application for a residency at the Robert M. MacNamara Foundation. I frankly knew little about the Foundation or the residency program, because I could not find a dedicated Web site (I suspected that might dissuade a number of potential applicants, which might be helpful to my own application chances). So initially, my main source for information was the Foundation’s listing on the Alliance of Artists Communities Web site.

I had to request the application materials (something else that I suspected might discourage applicants who might limit themselves to programs with downloadable materials). And when I received those materials I was immediately intrigued by a number of things:

1) The professionalism of the program description;
2) The generosity of the residency, including six weeks’ accommodation (private room and bath for each artist) plus all meals and a stipend for travel/materials;
3) The idea of spending time in coastal Maine;
4) The absence of an application fee (or any residency fee);
5) The relative simplicity of the application process (and the serendipity of my request, which arrived with time to spare before the single, annual September application deadline).

The Foundation runs four residency periods (for up to seven artists and writers at a time) each year. Last January I heard back: I’d received my third choice, a fall 2006 residency. As it happened, this worked out beautifully considering personal/family matters that developed after my application had been submitted (I would have had to turn down my first-choice summer assignment). And I imagined that fall in Maine would be pretty spectacular. I was right about that, as you can glimpse from the photo I’ve included with this post.

Six weeks away seemed a real luxury, and I began plotting how to maximize my freelance/teaching time before the fall. Ultimately, however, I was unable to stay the full six weeks, in part so I could work at the conference I referenced in yesterday’s post. Another artist had to leave when I did, too, four weeks into the program; this is by no means the ideal way to go about things.

I drove from Cambridge to Westport Island (about an hour north of Portland) the last Friday in September. I’ll tell you what happened after that the next time I post within this “series”!