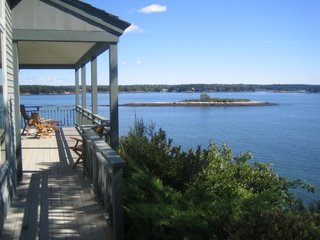 Here’s the second installment of a short series of posts about my recent residency at the Robert M. MacNamara Foundation.

In my previous post, I discussed the application process–how I found this particular opportunity and what I was thinking as I applied. Now I’ll tell you what I found when I got there.

The place–both the Foundation’s buildings and the general location (an hour north of Portland)–is stunning. Residents are housed in one of two buildings: MacBarn (pictured elsewhere on the blog) and what’s called the “Irish House.” I was assigned to the Irish House. I had an upstairs bedroom/bath (practically the size of my entire apartment at home). Take a look at the photo included with this post to see the back porch.

Alas, all’s not perfect even in paradise! The Irish House is about one half-mile down the road from MacBarn; I was ultimately very glad that I had my car, especially when returning from evening meals/gatherings at MacBarn; street lights aren’t exactly as common in rural Maine as they are in my urban hometown. I’m also not quite “a dog person”; apparently, leash laws aren’t uppermost in some of the Foundation’s neighbors’ minds.

My room was, simply, huge. I wrote (typed) at a table, and read most of the books previously listed in a big, green chair right by the window. For variation (when it wasn’t too cold) I read outside on the porch.

Since I drove up from Massachusetts, I was able to bring more “stuff” than I’d brought with me to previous residencies (when I’d traveled by air or bus). But so much was provided–down to extra toothpaste in case I’d forgotten it–that I didn’t need some of what I’d brought.

I arrived early on a Friday afternoon. By the end of the day, all seven of us were there: five visual artists and two writers. We came to the residency from six different states (two of us from Massachusetts). The first evening began with drinks and hors d’oeuvres up at MacBarn, followed by dinner, giving us the chance to get acquainted with each other and the very dedicated Foundation staff.

I’ll tell you more about my daily routine next time.