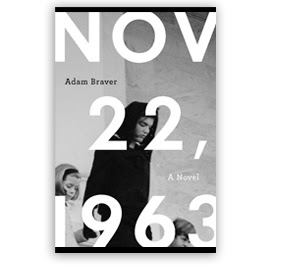 According to the Historical Novel Society, “To be deemed historical…a novel must have been written at least fifty years after the events described, or have been written by someone who was not alive at the time of those events (who therefore approaches them only by research).” Author Adam Braver may have been alive when President John F. Kennedy was assassinated: Braver was born in 1963. But he obviously does not remember the event, and he has approached it through a fascinating combination of research and fiction-crafting in his new novel, November 22, 1963 (Tin House Books).

I thought I knew a lot about the assassination, which is an historical event for me, too (my parents were still a few months away from meeting each other on November 22, 1963). But Braver’s book, which focuses in depth on the events of that day through the closely-drawn third-person eyes of everyone from a Dallas policeman to Abe Zapruder to Maud Shaw (Caroline and John-John’s nanny) to, of course, Jackie Kennedy, opened up so much more.

Most of us will never know what it was to be Air Force One as it bore the slain President’s coffin back to Washington; Braver has imagined that. Most of us didn’t witness the autopsy at Walter Reed; Braver has evoked it. Most of us can’t imagine how Maud Shaw told six-year-old Caroline what had happened (I hadn’t even realized that Jackie Kennedy had given the nanny that awful task); Braver shows us how it might have happened.

They were the only two in the room, but…Miss Shaw could barely look at Caroline, tucked firmly in bed under the canopy of rosebud chintz, forcing a confident expression, though it was clear she knew something wasn’t right; and Miss Shaw’s eyes were tearing while Caroline stared at her, almost demanding an explanation other than Miss Shaw taking her hand and apologizing for the tears; and Miss Shaw knew she could wait until morning (Mrs. Auchincloss told her Mrs. Kennedy said it was up to her to gauge what the children did or didn’t know), but she looked at Caroline and something told her it wouldn’t be fair to send the girl to sleep, to let her wake up full of promise—better for the girl to wake up as part of the grief, and that way maybe she’ll mourn more purely; then Miss Shaw inhaled so deeply her gut almost burst, and on the exhalation she said that there had been an accident; then she paused, realizing the sound of hope in the word accident, and corrected herself to say, ‘He’s been shot, and God has taken him to Heaven because they couldn’t make him better in the hospital,’ and then closed her eyes, praying that when she opened them she wouldn’t see Caroline crying—that this had all been a dream.

This is historical fiction at its best: intensely researched (check out Braver’s staggering list of acknowledgments, including the Oral History collection at the John F. Kennedy Presidential Library and Museum [Maud Shaw’s is among the transcripts Braver tells us he accessed]) and beautifully written. I recommend it highly.