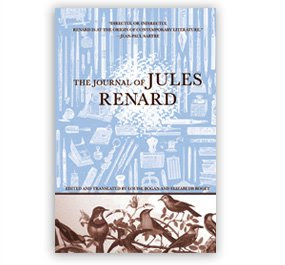 The first in a new “Lost and Found” series from Tin House Books, The Journal of Jules Renard holds a number of lines bound to resonate with practicing writers. They’re not always cheerful (to say the least!), but they are there. I’ve chosen some to share with you.

Renard lived from 1864 to 1910. This edition was edited and translated by Louise Bogan and Elizabeth Roget.

And here’s some of what Renard had to say about writing:

“To write in the manner that Rodin sculpts.”

“The critic is a botanist. I am a gardener.”

“Yes, I know. All great men were unknown at first. But I am not a great man, and I should be just as pleased to be known now.”

“If the word arse appears in a sentence, even in a sublime sentence, the public will hear only that one word.”

“I have not renounced ambition. The fire still burns in me–a banked fire, but alive.”

“Writing. The most difficult part is to take hold of the pen, dip it in the ink, and hold it firm over the paper.”

“This is a notebook of abortions.”

“The arm I want to extend toward my manuscript seems to be paralyzed.”

3 thoughts on “Quotable Quotes from The Journal of Jules Renard”