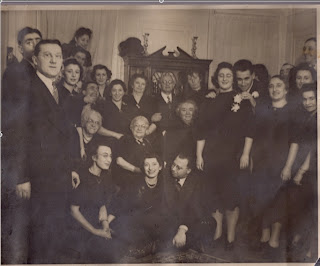 As I’ve mentioned before, the animating spirits behind my forthcoming story collection, Quiet Americans, are my paternal grandparents, Jews who left Germany in the late 1930s. What seems to surprise some people is that rather than having immigrated to the United States together, my grandparents met and married here in New York. This photograph was taken at their wedding in January 1941. The bridal couple is toward the right side of the photo: Grandma is wearing a corsage and Grandpa is touching her shoulders.

I’m not sure when I started to imagine some of the emotions of that wedding day. Given the engagements and weddings I’ve seen in my lifetime, and given our own family’s closeness, it was, and remains, very hard for me to envision a wedding where not only are no parents of the bridal couple present, but none have even met or spoken with their child’s spouse.

But that was my grandparents’ situation. My grandmother had left her parents behind in Germany; they were eventually able to immigrate to South America and join her brother there. My grandfather’s biological parents were both long dead by the time my grandfather reached adulthood, and the woman he called mother was trapped in Europe (soon after this photo was taken, however, she did manage to get to New York, where she moved in with the newlyweds).

Not all of this has made its way into the book (some of it, frankly, seems more apparent in my abandoned novel). But now that you are sharing this pre-publication journey with me, I wanted to introduce you a little more fully to two of the “real” people behind Quiet Americans.

P.S. On the far left side of the photo you will see Rabbi Herbert Parzen, who officiated at the wedding (he also performed my parents’ wedding ceremony 25 years later). Rabbi Parzen was himself married to one of my grandmother’s American-born cousins–Sylvia–who was instrumental in helping to arrange my grandmother’s immigration. Part of “Uncle Herbert”‘s rabbinic life was dedicated to serving as a chaplain for Jewish prisoners in New York. Which may be why this call for Judaica items from Jewish Prisoner Services International, which I discovered via the Association of Jewish Libraries just last week, has resonated with me. My family and I will be checking our own collections to see what we can donate. Perhaps some of you can, too.

4 thoughts on “Thursday’s Pre-Publication Post: Meet My Grandparents (and the Rabbi Who Married Them)”