Earlier this week, the Fiction Writers Review blog spotlighted an essay by author Aryn Kyle. Titled “‘This Book Made Me Want To Die’ And Other Thoughts From Readers,” the essay engages with comments/reviews Kyle has received with a decided point of view: that maybe, she should try to write something a little “happier”:

“Mostly,” Kyle writes, “what I learned about my book is that it’s depressing. Not just depressing, but ‘pointlessly depressing’; ‘brutal’; ‘disturbing’; ‘unrelentingly bleak’; and ‘appalling’—just to touch on the tip of the critical iceberg. One reader claimed to be so disturbed by [Kyle’s novel] The God of Animals that, upon finishing it, she had to medicate herself with sleeping pills.”

But when people tell Kyle to write something “happy,” she can’t quite understand. “Happy like Anna Karenina? Happy like The Grapes of Wrath? Happy like Lolita or Catch-22 or Revolutionary Road? Happy like Hamlet?”

You get the idea.

Because the publication of my story collection, Quiet Americans, is still several months away, I don’t yet have access to a comparable trove of reader reaction. But that doesn’t mean that I can’t already identify with the essay and the points Kyle has raised.

In fact, while I was reading, I couldn’t help but recall one AWP conference, at which I finally met one of the TriQuarterly editors who had helped bring my story, “Matrilineal Descent,” to the reading public. I’d gone over to the journal’s Bookfair table to introduce myself. “Ah, yes,” the editor said. “Your story. It was a laugh a minute.” To which I responded—how else?—by laughing. (Attention, lucky readers! You, too, can enjoy the utter comedy that is “Matrilineal Descent” when the story reappears in Quiet Americans this winter.)

But Kyle’s essay also sent me straight to the shelf where the Purple Binder (pictured) rests. 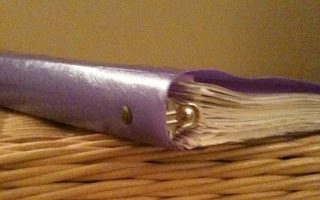 The Purple Binder, my friends, contains all the many rejection letters and e-mail messages that I received from agents and publishers who considered my collection, in one variant or another, over a five-year period. (It should not be confused with the far thicker Red Binder, which contains rejections received for individual short stories.)

I was certain that I’d find some echoes of the comments that have come Kyle’s way within the Purple Binder’s pages. And guess what? My memory was right.

Thank you for giving us a look at four stories from your collection, Former Title, which [Big-Time Agent] asked me to review. I’m sorry about the delay in getting back to you, and I wish I had better news. I very much admire your writing and found all four stories very strong, but I’m afraid that this collection would be difficult to sell. The cumulative effect of your stories, with themes ranging from the Holocaust, to fetal defects to racism, is too downbeat for the editors we deal with.

Nonetheless, I think you are a talented writer. If you are not too put off by these remarks and you begin a novel, we’d love to see the first 50 pages.

P.S. Let me know if you’d like me to return your pages.

(By the way, that part of the message about welcoming a novel didn’t surprise you short-story writers, did it?)

In truth, I’m trying not to think too much just yet about what people will say about Quiet Americans once it has been published (assuming that it receives any attention at all). But if the book is faulted for not being “happy” enough, at least I’ll be prepared. And in good company.

4 thoughts on “Thursday’s Pre-Publication Post: Come On Get Happy!”