Most of the writing on creating fictional characters from real-life personages focuses on recognizable people: historical figures, celebrities, and so on. (The tour guide who appears in my story “The Quiet American, Or How to Be a Good Guest,” may well be based on an actual tour guide, but I did not give too much thought to the implications of creating a fictional döppelganger in that case.) And it’s this traditional emphasis that continues in the Guardian post as well.

If that focus isn’t necessarily relevant in the context of the tour guide character, it’s much more applicable when viewed in the context of some other stories in Quiet Americans. “For Services Rendered,” which opens the book, includes as key characters Reichsmarschall Hermann Göring and his second wife, Emmy. (For some background on what inspired this story, and the research that went into it, you can read the essay I wrote for the Scribblers on the Roof website awhile back.)

“Real-life characters” (not to mention events) appear elsewhere in Quiet Americans. For instance, Golda Meir makes a cameo in a story titled “Homecomings.” (Admittedly, one of the MFA classmates who critiqued an early version thought I’d invented Mrs. Meir. But the first female prime minister of Israel was, in fact, a “real-life” person.) 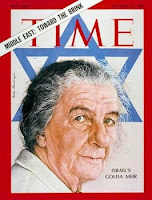 And anyone who reads “Floating” and recalls the brouhaha concerning a certain state poet laureate and a 9/11 poem will be able to identify the real-life inspiration behind a certain sub-plot, even without the use of the poet’s name. I’m still not certain why I chose not to name the poet in that story. One may be this major difference between the other characters and the poet: The poet is still alive.

As I continued to think about my stories this week in the context of the Guardian article, I realized something else: In a way that’s quite different from the situation with “For Services Rendered,” where everything that Hermann and Emmy Göring say and do has major repercussions on the rest of the story, the real-life characters within “Homecomings” and “Floating” are minor players, presences that help illuminate aspects other, major characters and events in each piece.

Or at least, that’s what I think. Come January, we’ll see if you agree.